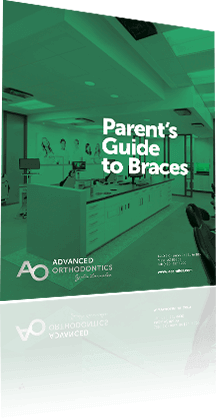 Everything you and your child need to know about braces and the treatment process.

It has been an unprecedented past few months for everyone with the Coronavirus putting our health and normalcies of daily life to the test. We closed our offices early to abide by the regulations set forth and are happy to have reopened with the proper safety measures in practice.

To limit the amount of foot traffic in our physical office, we are offering the option of virtual visits for new and existing patients. We understand many patients still feel uncomfortable coming into the office and we are happy to accommodate the same level of care as an in-office visit. If you are interested in a virtual orthodontic visit the Advanced Orthodontics team will schedule a time for you to meet with a member of our team through a HIPPA secure video. You can access this virtual visit on a desktop or smartphone. When scheduling you may be asked to provide photos for Dr. Larrabee to review and get a good sense of how to go about treatment.

For patients who are choosing to come into the office, we are limiting the number of patients in our locations to allow for social distancing. Patients can text or call when they arrive. As a courtesy, a Team member is walking each patient from their car to the chair/assistant at the time of their appointment so that the lobby/waiting room is not utilized. Once the appointment is complete, you will again be escorted back to your car and a parent is briefed on what was done today and when we would like to see you back.

We always maintain a clean environment, by OSHA standard, but are also making sure our non-clinical areas of the office are being cleaned more frequently as well. We make sure all tools are indeed sanitized between patients as always, wear gloves during examinations, and continue to wear masks in our offices to limit the spread of any viruses.

None of us know how long this pandemic may last. If you are on the fence about beginning orthodontic treatment during this time, rest assured all safety measures are in place to ensure your safety and the safety of our staff. Call today for a virtual consultation.

The two methods involve very different approaches. That said, it’s essential to walk through each step, so patients are fully informed on how the Invisalign process works.

Should you and your orthodontist conclude that Invisalign is ideal for you, you’ll then have scans or molds of your teeth taken. At Advanced Orthodontics, we utilize 3D digital imaging to create a digital model of your teeth – eliminating the need for old fashion impressions.

From there, the orthodontists will send your records to Invisalign and work with their engineers to create a treatment plan that will give you the smile of your dreams.

The Invisalign process works by giving you a series of trays that contain various sets of clear aligners. Typically, you’ll receive these trays in 4-6 weeks following your initial consultation.

Depending on your specific case, each set of aligners will need to be worn between47 and 14 days, unless your orthodontists specify otherwise. It is vital that you follow your orthodontist’s instructions to ensure that your treatment plan stays on track.

Once you’ve finished with one set of aligners, you’ll move on to the next set. This, again, will be included in your detailed set of instructions for your treatment plan.

How Long Does the Invisalign Process Take?

The Invisalign process works on an individual basis. This means that there are not specific outlines as to how long the process takes. However, a typical patient can expect their treatment plan to span anywhere between 6 months and a year. More complex cases may take more time.

Ready to See If the Invisalign Process is Right for You? We’re Here to Help

With the overall Invisalign process taking less time to complete, it’s no surprise that patients of all ages prefer to go the Invisalign route, as compared to traditional braces.

Ready to see if the Invisalign process is right for you? Then schedule your consultation today!

It can be hard to decide to make a change, especially when someone over the age of 18 decides on adult braces – especially if they have only known traditional braces growing up. The good news is that there are now more options for those who need orthodontic care, including clear aligners. Invisalign is a brand of clear aligners that many orthodontic patients opt for in lieu of traditional metal braces. While the brand is well known, what exactly are the Invisalign pros and cons, and how do they differ when talking about Invisalign for adults vs. Invisalign for teens?

Invisalign Pros and Cons for Adults

Pros of Invisalign for Adults

When it comes to orthodontic treatments for adults, Invisalign for adults is quickly becoming the most popular choice. Not only are they a well-known brand with an impeccable reputation and superior technology to back it up, but they have several advantages. This is even more evident when compared to traditional metal braces.

The most common pros when it comes to Invisalign for adults include:

Cons of Invisalign for Adults

A few of the most notable cons of Invisalign, which are practically inconsequential, include:

Not quite sure if the Invisalign pros and cons we’ve listed are enough to help you decide on getting Invisalign as an adult? Then why not consider checking out our gallery of Invisalign before and after photos showcasing examples from real clients of our Advanced Orthodontics office.

If you are still unsure, then we encourage you to schedule a consultation so that our team can discuss your concerns and get your questions answered. With two offices located in Mesa and Chandler, Arizona, we are here to put your mind at ease when it comes to the Invisalign pros and cons.

Invisalign aligners are the orthodontic treatment of choice for most people, mainly because they’re so much easier to deal with than traditional braces.

However, that doesn’t mean that you don’t need to spend time each day taking care of and cleaning them.

Today, you’ll learn how to clean clear retainers to keep your aligners in good working order and maintain healthy and decay-free teeth.

How to Clean Clear Retainers – A Step-by-Step Instruction Guide

It all starts with asking the question: “Where can I find orthodontics near me?” Before you know it, you’ve found an orthodontist you love and are scheduling your appointments to receive Invisalign braces.

Once you receive your aligners, your orthodontic team will demonstrate how to clean your new clear retainers. Doing so daily is important in order to remove bacteria, prevent plaque build-up in/on the aligners, and ensure there are no food particles left in them.

If aligners aren’t cared for properly, it can potentially lead to:

Here’s how to clean your Invisalign aligners.

How to Care for and Clean Your Clear Retainers

If you (or your kids – whoever is wearing the aligners) want to keep your teeth healthy and strong down the road, you need to take care of them now.

The great thing about Invisalign aligners is that they’re incredibly easy to clean. Cleaning them will add just a couple minutes a day to your existing dental hygiene routine. The benefits though, can last a lifetime.

Seeing how to clean clear aligners may benefit you or your teen more than just reading about it. Would you like a refresher demo? Contact us today. Our team will be happy to explain how to properly care for, clean, and store your aligners.

Traditional braces aren’t the braces of choice for most dentists anymore.

Is this really the best option though? Should you and your family invest in Invisalign for teens?

Read on to find out why clear aligners are so popular among dentists, orthodontists, parents, and teens alike.

Removable Braces – How They Differ from Traditional Braces

Traditional braces are made of metal brackets and wires, held in place by a small door mechanism. They are bonded to the teeth, thereby making them semi-permanent, at least until your orthodontist removes them.

Removable braces are aligners made of strong plastic resembling whitening trays. They’re worn for most of the day, except when you eat or engage in your oral hygiene routine.

Why should you choose Invisalign over traditional braces? They align the teeth faster, are more comfortable, and of course, they’re removable.

The Benefits of Removable Invisalign for Teens

Removable braces are a great option for teens for multiple reasons.

First, they’re easy to clean and their removability makes it easier to brush and floss. In fact, the difficulty of homecare caused by traditional braces makes some kids avoid cleaning their teeth at all.

Second, they tend to move the teeth faster and with less discomfort than traditional braces, which everyone loves (especially teens).

Another reason why Invisalign is such a great option for teens is that they’re able to be removed for special occasions, those occasions when the last thing a teen wants to think about is something on their teeth. Times like:

Can an orthodontic patient remove their clear aligners whenever they want to? Such a question is a loaded one. The answer is yes and no.

Yes, you can remove them to eat, clean your teeth, and for special events. For the most part, though, you’ll want to keep the aligners in place to achieve the results you want in the quickest timeline.

The team at your Arizona orthodontic center will tell you just how many hours a day you need to wear them for the best results (typically, 20+ hours a day). The longer you wear the aligners, the faster you’ll see progress.

The great thing about removable braces is that even though you need to wear them for most of the day, you still get to remove them at important times. You can’t say that about traditional braces!

Would you like to know if Invisalign for teens is the right choice? Contact us today to set up a consultation and smile assessment.